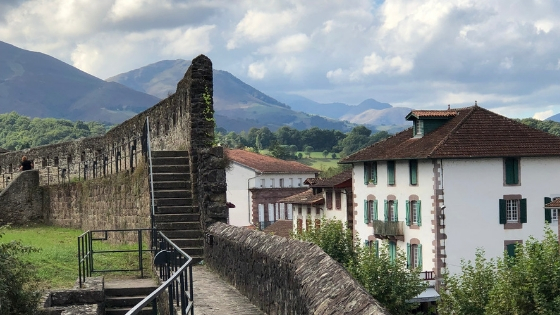 In the foothills of the French Pyrenees lies the small Basque village of Saint-Jean-Pied-de-Port. The winding Nive river runs through the town and is crossed by several picturesque bridges.

With the town’s steep cobblestoned streets, timbered buildings, medieval stone structures, and abundance of flowers, the village must be one of the prettiest in France. 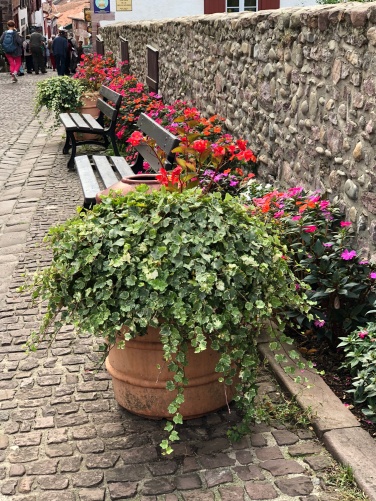 The village itself is very small and can be walked in a few hours.  The steep cobbled rue de la Citadelle forms the heart of the village and is lined with shops, inns, and restaurants. A stroll through the town offers a close-up view of the medieval city gate — the Porte d’Espagne — and the 14th-century Gothic cathedral. The architecture in this old section is picturesque with arched doorways, tiled roofs, shutters, and charming details — 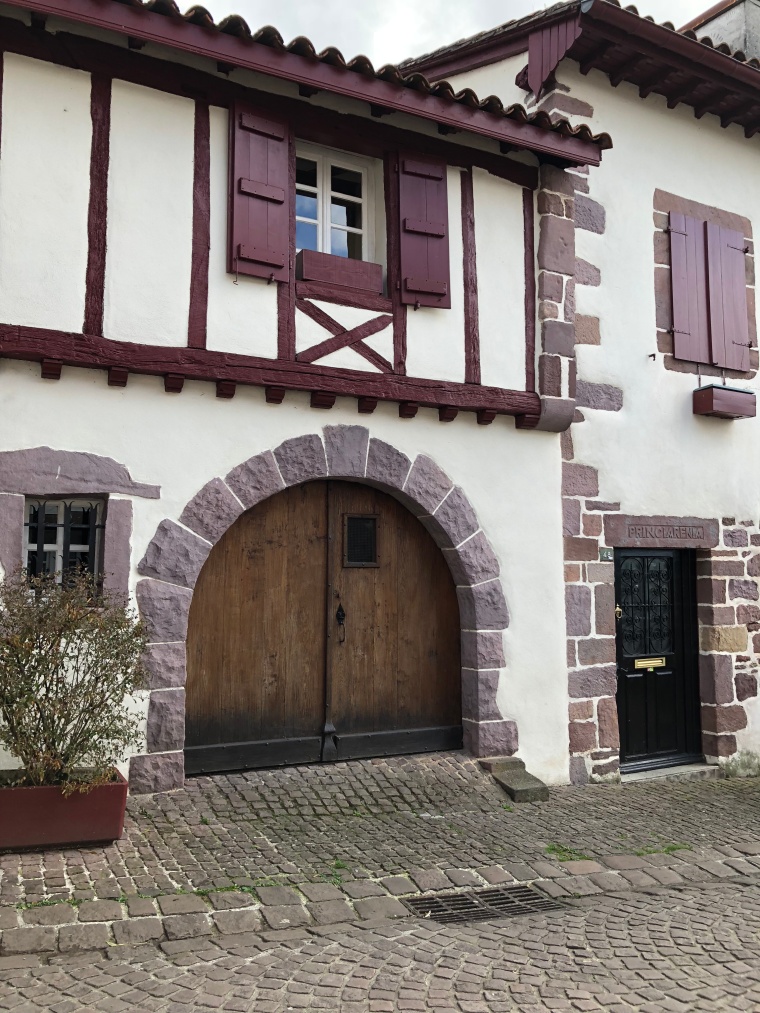 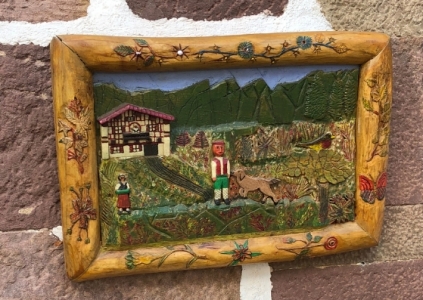 all set against stunning views of the valley and mountains. 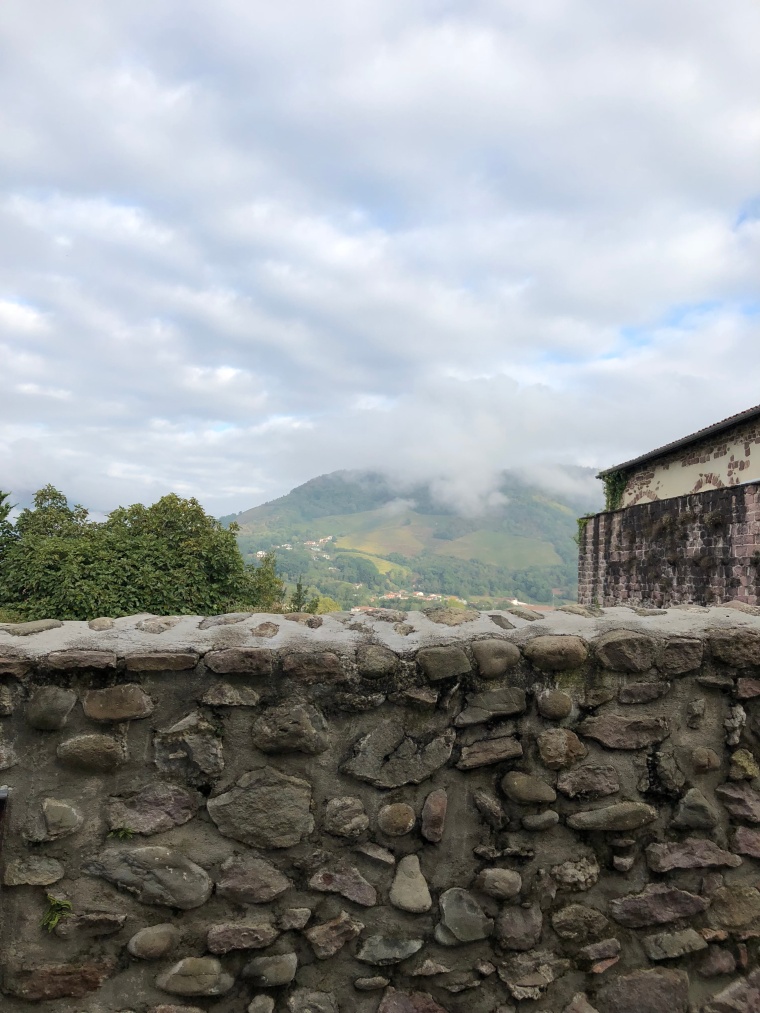 There are several walking trails around the area for longer excursions, such as the one along the medieval city wall. This path eventually leads to the citadelle, high atop the village. 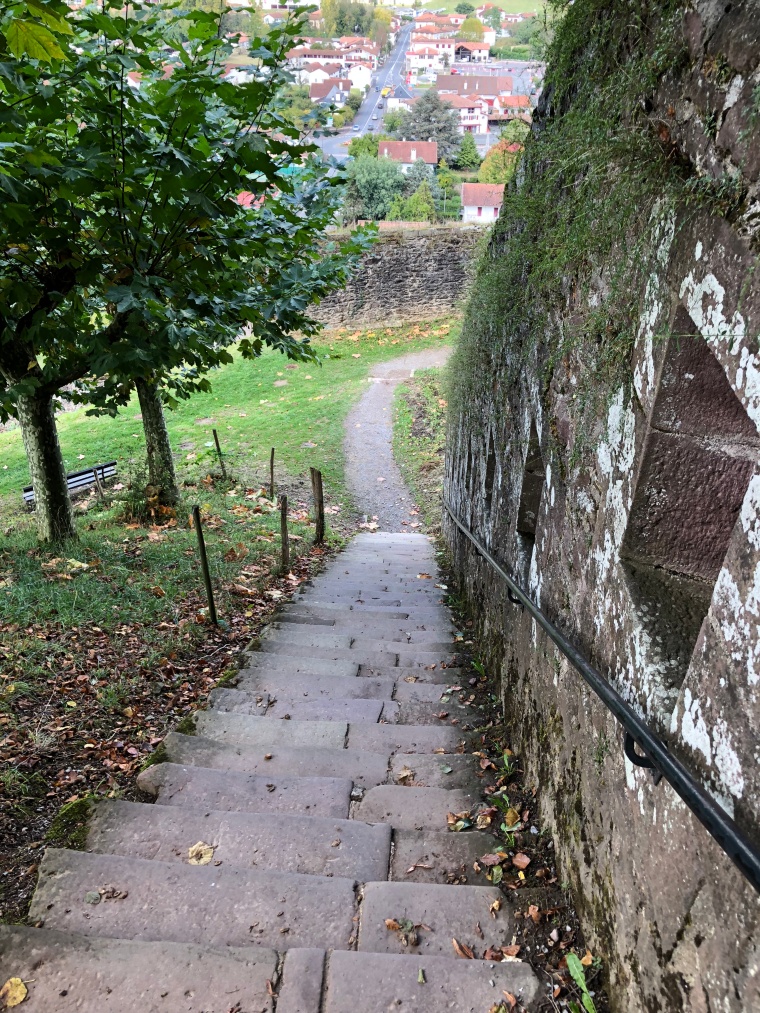 The citadelle was built in the 12th century to protect the river and the crossing route over the Pyrenees. 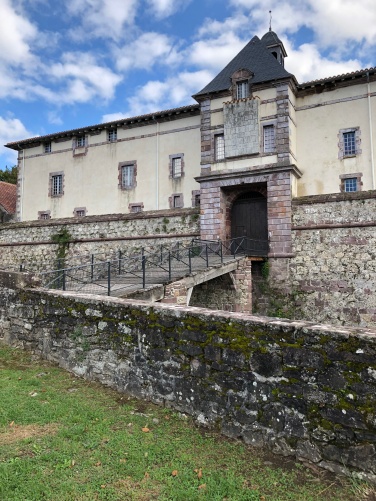 The site near the chateau and fortifications offers magnificent views of the mountains and valley, and the village below. 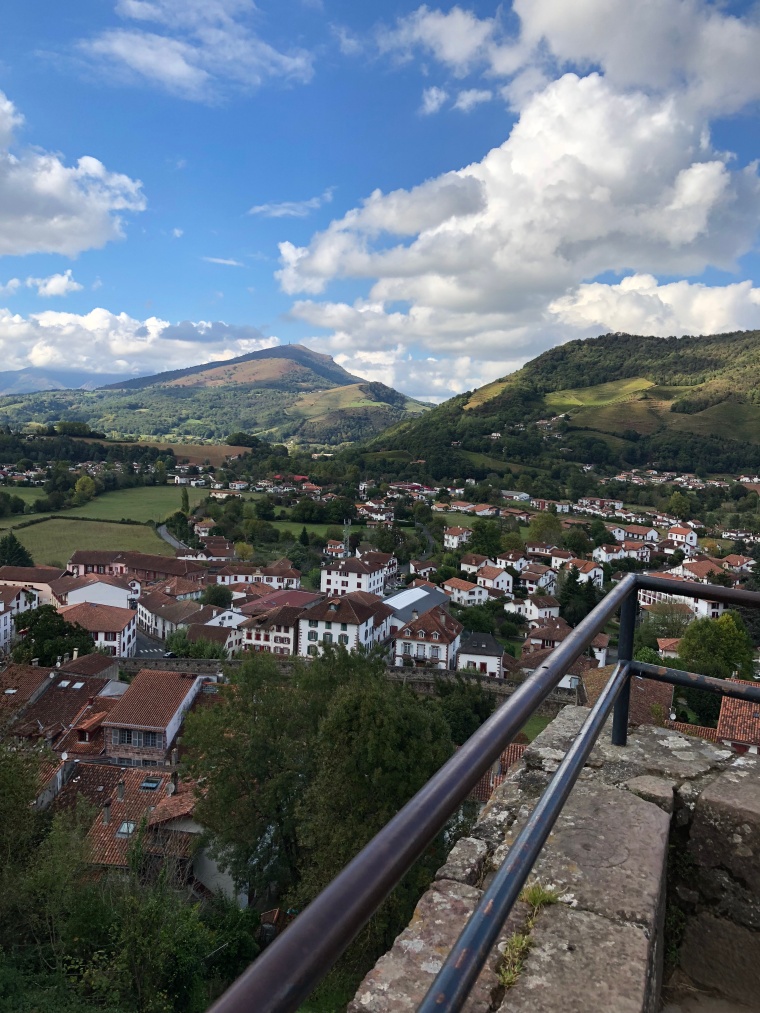 The citadelle protected the mountain pathway to Spain — the Roncevaux Pass — making Saint-Jean-Pied-de-Port an important point on the pilgrimage to Santiago de Compostela — also known as the Way of Saint James, the Camino de Santiago, or simply, the Camino.

For those departing from Paris or elsewhere in France, the route was referred to as the French Way. Saint-Jean-Pied-de-Port was the pilgrims’ last stop before beginning the arduous trek through the Pyrenees. Pied-de-Port means “foot of the pass.” 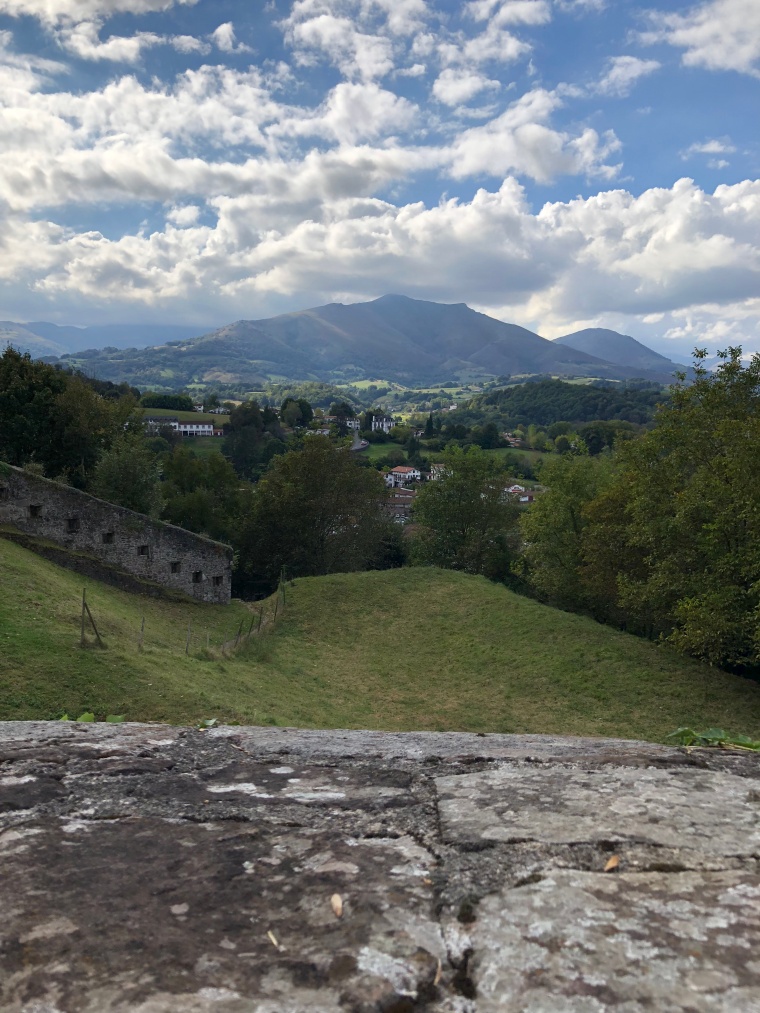 Today it is also popular with hikers and cyclists. According to caminoways.com, the French Way is the most popular of all the routes, with over 177,000 pilgrims making the journey every year. Approximately 34,000 pilgrims choose Saint-Jean-Pied-de-Port as their starting point. 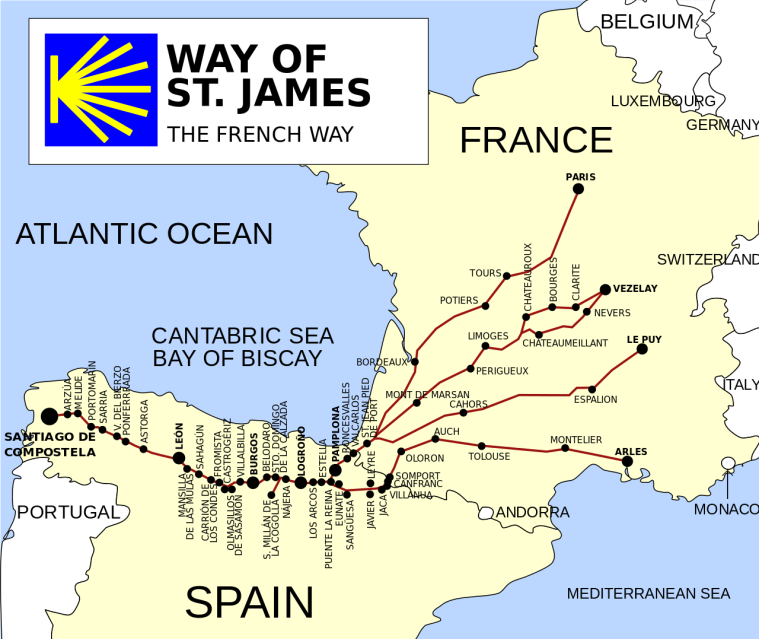 Several shops along the rue de Citadelle sell gear for the trek, including walking staffs or hiking poles. A rhythmic “click, click” sound made by the pilgrims and their walking sticks can be heard in the Camino towns along the route.

Two symbols are found throughout the town of Saint-Jean-Pied-de-Port — on shops, menus, clothing, and souvenirs  — the lauburu, or Basque Cross, 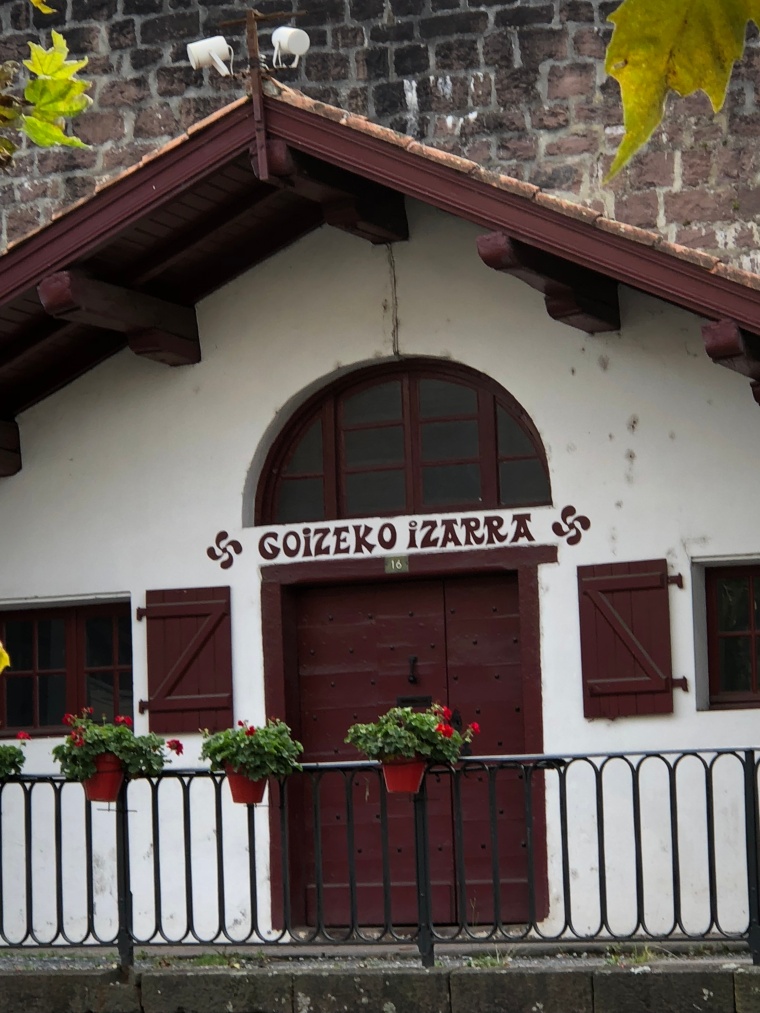 and the clamshell, the symbol of pilgrimage.

“Since the scallop is native to the coast of Galicia, the shell also became a memento, a physical proof of having completed the pilgrimage to Santiago….The shells also had a practical purpose: they were a handy and light replacement for a bowl so the pilgrims could use them to hold their food and drink on their long journey….Medieval pilgrims often wore a scallop shell attached to their cloaks or hats during their journey” (caminoways.com), as shown on this tapestry in the village’s small museum.

The image of the scallop can be found on several inns and shops of Saint-Jean-Pied-de-Port, 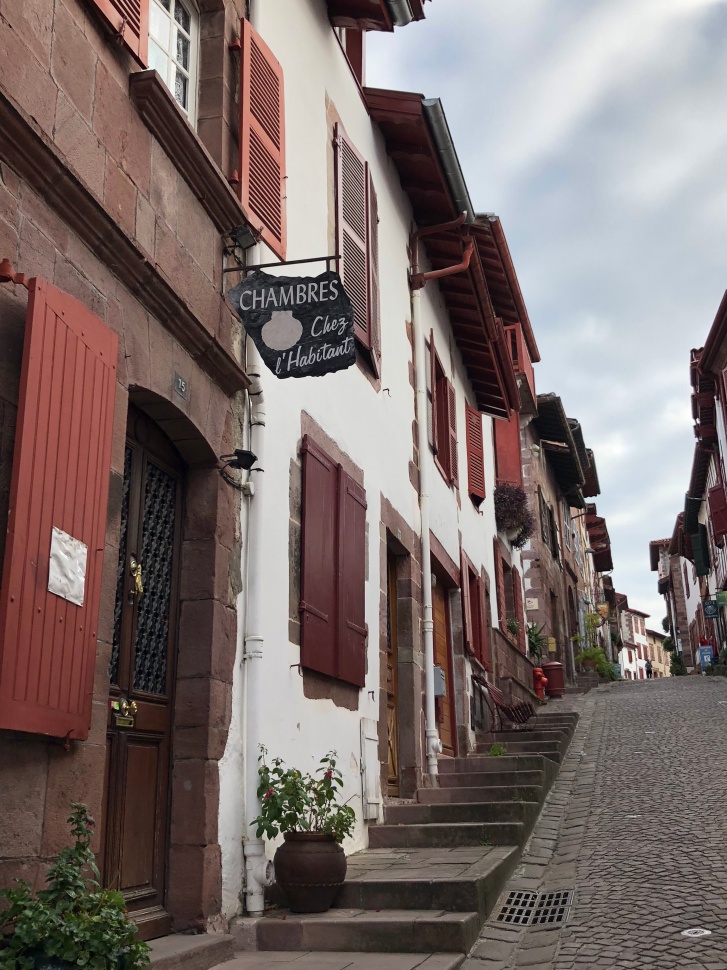 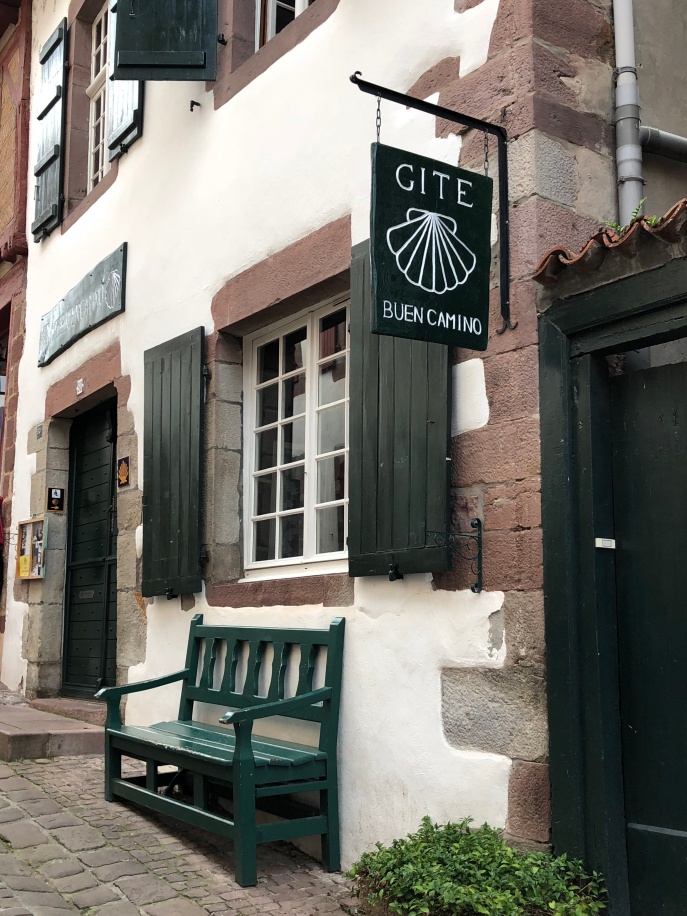 along with images of medieval pilgrims. 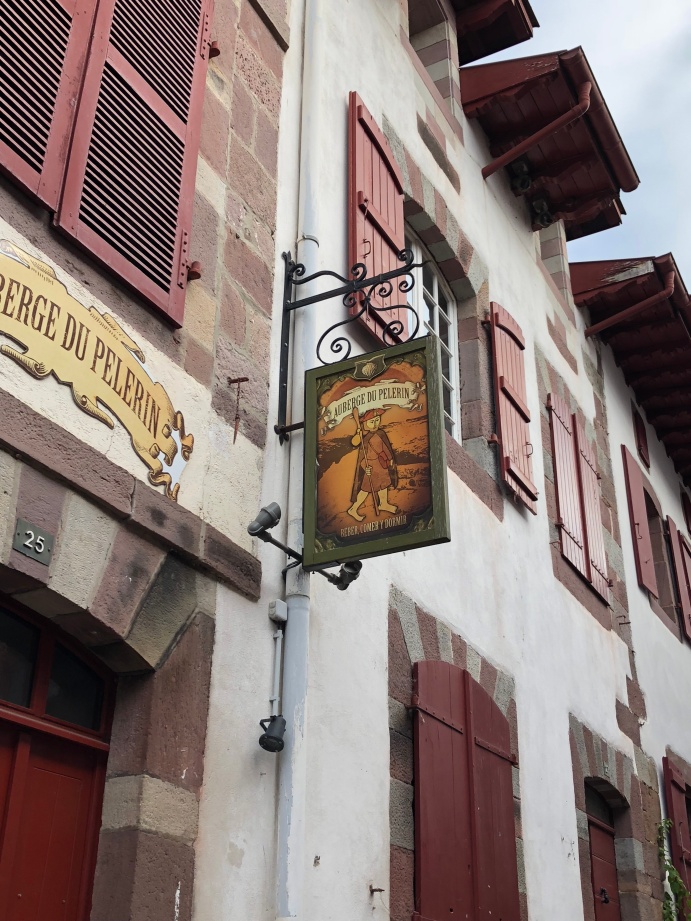 Saint-Jean-Pied-de-Port is a tiny town with a long name and a long history. For centuries, it has been a crossroads for travelers and pilgrims, and still offers its charm and beauty for the tourists and pilgrims of today.