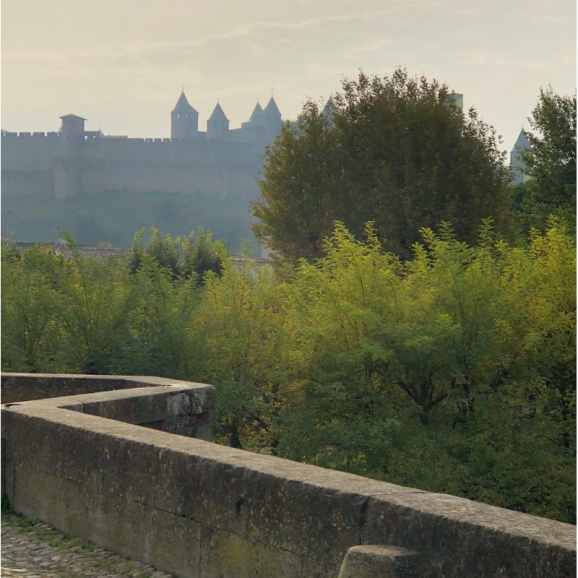 For many years I had longed to see the beautiful medieval city of Carcassonne and recently I was able to make that dream come true. Carcassonne did not disappoint. 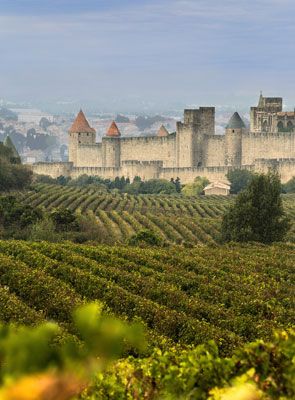 Located in the Languedoc region of southern France, Carcassonne is famous for its medieval citadel, La Cité, the largest walled city in Europe, with numerous watchtowers and double-walled fortifications. Languedoc is also famous for its wines and the hilltop city sits high above the surrounding vineyards.

I arrived Carcassonne in the evening under a near-full moon. The hotel I stayed at was located at the foot of the hill, and I had a magnificent view of the fairytale city from my balcony.

Every day, I crossed the footbridge over the river Aude, climbed the steep cobblestone streets to the top of the hill, and entered the citadel through the lowered drawbridge. I spent hours wandering around the labyrinthine village, climbed the ramparts and spiral stairs of the towers, walked the walls which provided magnificent views of the valley below, and then rested and recharged at its many outdoor cafes.

Carcassonne was occupied by the Romans and later the Visigoths. Its strategic hilltop location was fortified over the centuries with walls, towers, drawbridge and moat, a fortress, and a cathedral — the Basilica of Saint-Nazaire. Layers and layers of history pervade the stones and gargoyles, the slate roofs and worn steps. 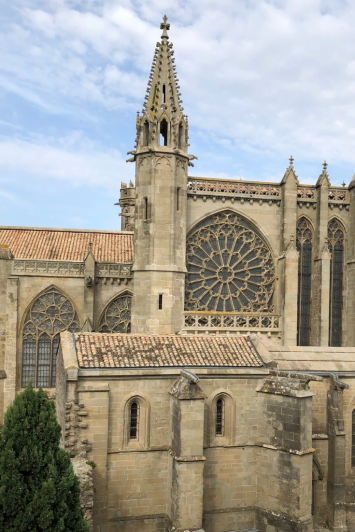 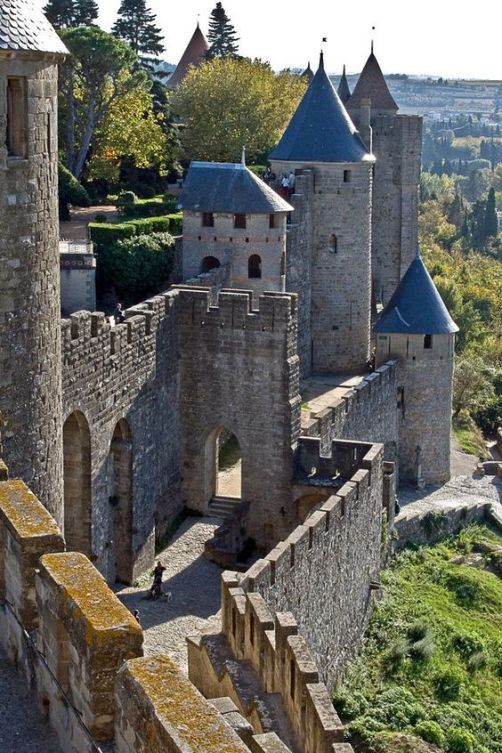 Today Carcassonne relies heavily on tourism and has several hotels, restaurants, and shops — even a small museum on the history of the French school system.

The heraldic Occitan cross, which dates back to the 12th century, and the fleur-de-lis hearken back to its medieval history and can be seen throughout the city. 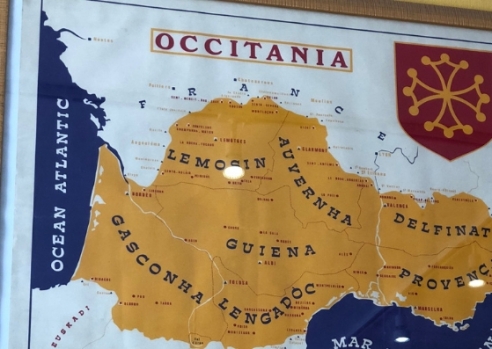 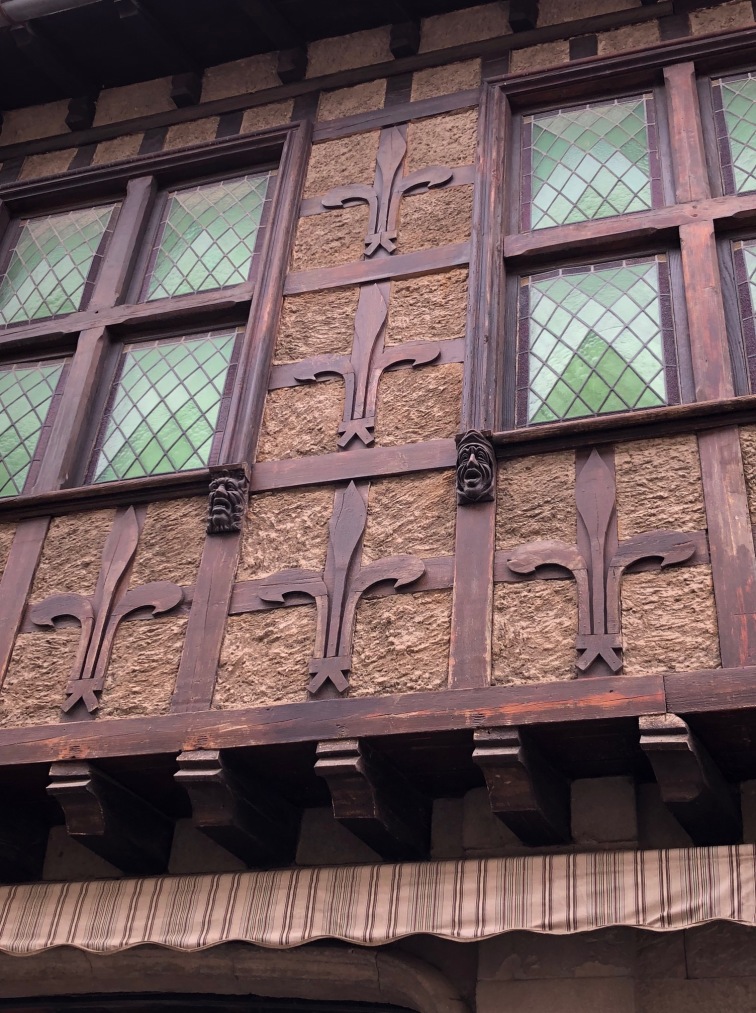 In the fall, Carcassonne has a particular beauty — pensive, tranquil, a bit wistful — and despite the tourists, a few quiet areas can always be found. 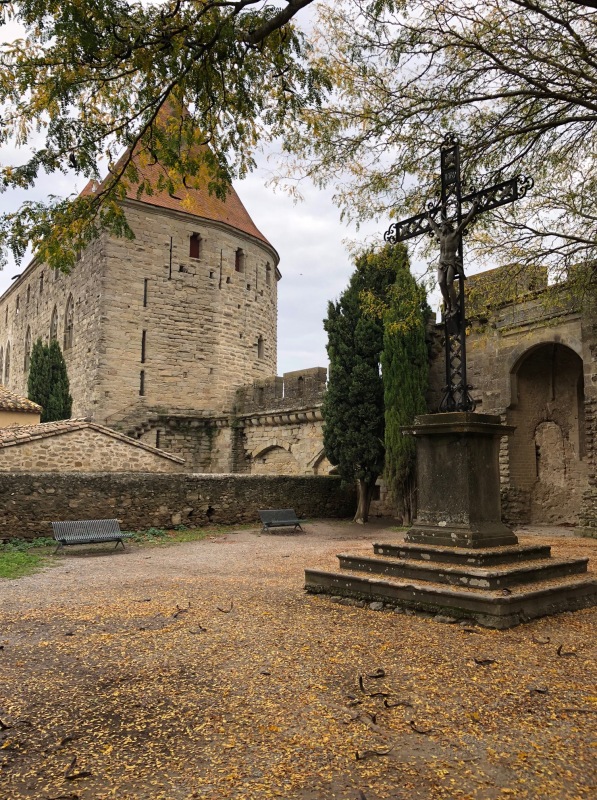 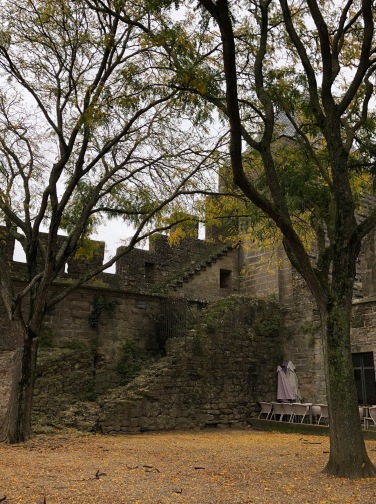 It is at night when the magic of Carcassonne can most be felt — when the years of history fall away and you step into the past. The crenelated ramparts and rounded towers take on an architectural sharpness, accentuated by light and shadow. 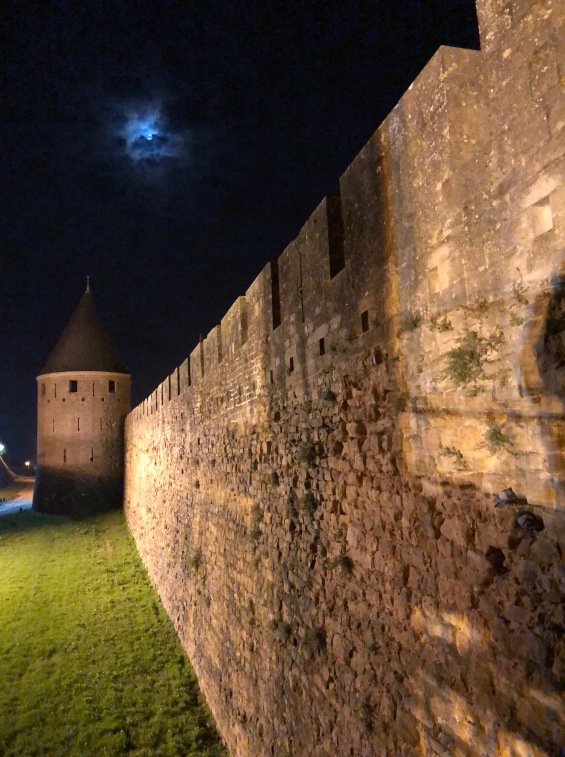 Crossing the drawbridge you can imagine the creak and clang of its chains, and you notice that the sounds inside the walled village are different — quieter, sometimes hushed. The interior of La Cité is softly lit by lampposts. Gold light pours onto the stone walls and archways and illuminates the curves of the cobblestone streets. It becomes a place of shadows and textures, mystery and beauty, drawing you further up into its heart. 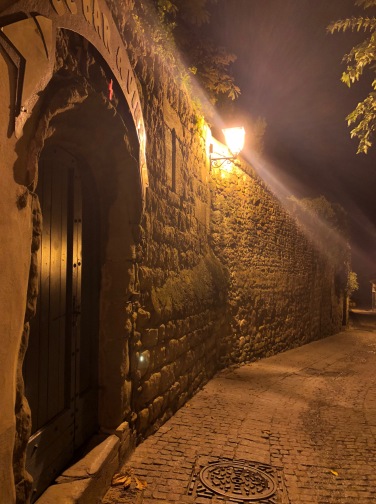 Even in the off-season of late October, the hilltop is surprisingly alive at night and the sound of conversation and laughter fill the outdoor cafes that ring the small square at the center. Wandering through the narrow streets, you come across several restaurants and hotels that bid a warm welcome.

Carcassonne sets one to dreaming. Its deep history and beauty inspire, shift your perceptions, and bring about a silent exchange with the past. For many, it is representative of the unattainable — something actual, yet ever elusive. In 1887 Gustave Nadaud wrote a poem called “Carcassonne,” in which an old man dreams of seeing “fair Carcassonne” before he dies. To him, the city embodies the longing for an ideal, a place of profound meaning, an experience that could be his — yet it remains beyond his reach. The final line is “each man has his Carcassonne” — a beautiful distant dream.